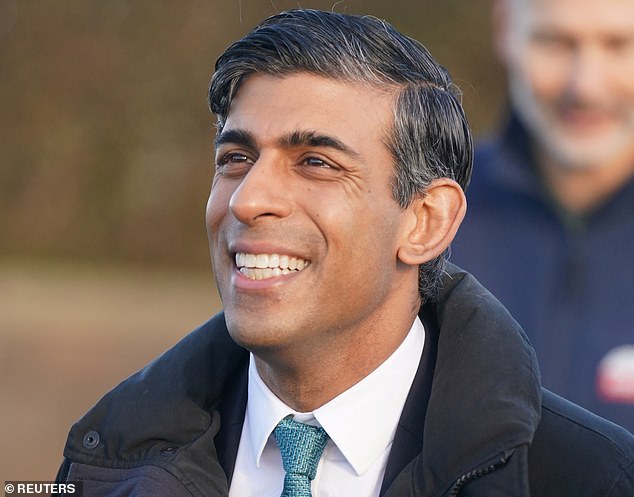 MAGGIE PAGANO: No one would say Rishi is an idiot for changing his mind about corporate tax

By Maggie Pagano for The Daily Mail

Ladies, it’s time to kick off the flats and bust out the heels that were hidden in the back of the closet during the Covid era when we vowed never to wear them again.

Like it or not, heels are back in fashion – that is, if your feet can handle it.

According to Primark, which enjoyed a huge trade for three months before Christmas and during the holiday season, young shoppers are flocking to buy heels and get dressed up again.

Tax trap: Even those idiots labeled by Rishi Sunak who advocate for lower taxes can see there is a way Chancellor Jeremy Hunt has more room for maneuver to make life easier for businesses

We’re also back to the after-work Friday night pint. The City Pub Group reports that even those still working from home are returning to the capital for a drink with friends.

That’s the good news. Now for the more sombre. The most recent S&P Global Purchasing Managers’ Index (PMI) fell from 49.0 in December to 47.8 this month, the lowest since January two years ago.

It is too early to say whether the weaker-than-expected PMI data confirm fears that the UK is heading for recession.

January is often the gloomiest month and given the combination of labor disputes, staff shortages, higher prices and higher interest rates, it is not surprising that activity slowed.

However, what the latest numbers will do is make it easier for the Bank of England not to have to raise interest rates when the MPC meets next week. More worryingly, government borrowing peaked at £27.4bn in December.

It is the highest December figure since records began in 1993, boosted by the cost of household energy bills and higher interest payments.

Some £7bn was due to the energy package, while interest on government debt more than doubled to £17.3bn over the year.

Interest rates have risen because higher interest rates on UK government bonds mean that the government will have to pay out more on the index-linked bonds in line with inflation.

About £14bn is due to indexed debt – money that doesn’t need to be paid out now, but inflates the loan amount.

Doug McWilliams, an economist at the Center for Economics and Business Research, suggests the numbers aren’t as dire as they seem.

This is because much of the extra borrowing – £8.6bn – is due to different assumptions made about the value of student loans in England.

The Office for National Statistics has yet to decide whether to revalue outstanding student loans upwards, leaving a difference of £8.6bn between its own calculations and those predicted by the Office for Budget Responsibility.

McWilliams predicts that the number of loans will be much lower than planned in the coming months.

What the higher-than-expected borrowing numbers have done is give Chancellor Jeremy Hunt more leverage to keep government spending firmly in check and avoid tax cuts when he announces the March 15 budget. This is misplaced.

Even those idiots who advocate for lower taxes, labeled by Rishi Sunak, can see that there’s a way Hunt has more room for maneuver to make corporate life easier. He doesn’t even have to say that these measures are tax cuts, just an adjustment if the facts change.

For starters, the windfall tax on oil and gas companies doesn’t work. The tax will cost more than it will bring in as the oil giants pull out of new investments.

He may also say that business is so fragile that an increase in corporate tax to 25 percent in April is no longer appropriate.

That’s not a tax cut, just keeping things the way they are. No one would say he’s an idiot if he changes his mind.

Rishi Sunak was perfect in his lobbying to get Cambridge-based chip giant Arm listed in both London and the US.

It’s not known if SoftBank founder Masayoshi Son is going for a dual listing, as the prospectus paperwork is hopelessly complicated – so much for global capital markets. If Son chooses the US, there is another way for the British to buy shares in an IPO.

Technology platform PrimaryBid has told ministers it could set up a retail offering, as it did for the US listing of luxury member club Soho House.

Estimated to be around £3bn in retail demand, Arm has always had a strong following among UK small investors. This is an excellent idea.

Hopefully it won’t stop Sunak from twisting Son’s arm to go for a double listing, and make some reforms if necessary.

A nearly £50bn Arm float in London would be a real coup and say more about the liquidity of Britain’s capital markets than any fancy speech.

Would a base rate rise to 4% rise mean mortgage rates start to go up again?

Would YOU fall for the cruel new son and daughter scam?