Is Ukraine winning the war against Russia? What difference will the Leopard 2 tanks make? 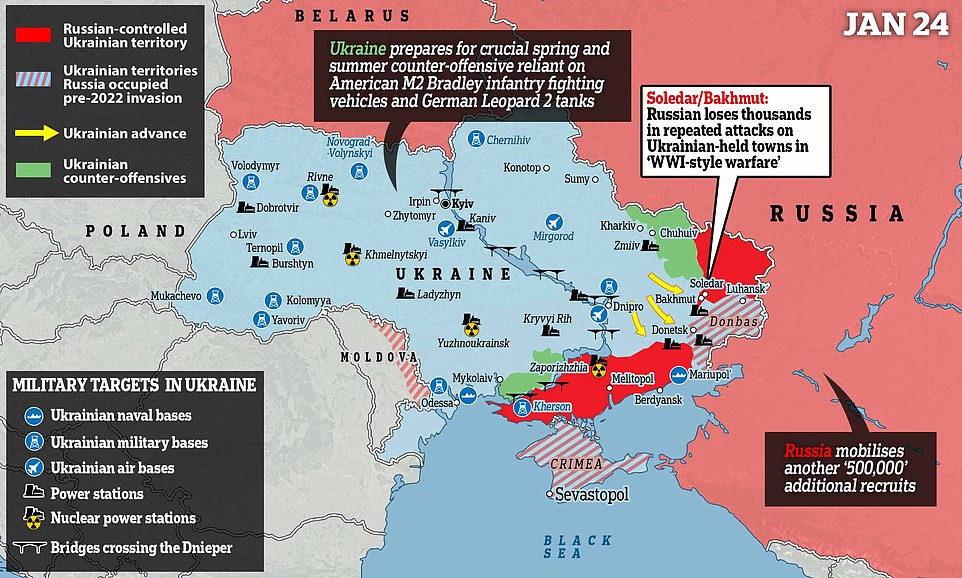 Ukraine could win its war against Russia this year, but may not because Western military support is “too little and too late,” a military expert said today.

JUSTIN BRONK, a research fellow at the Royal United Services Institute in London, discussed the latest situation in an article for MailOnline today, as Ukraine prepares for a crucial spring and summer offensive.

It comes as Germany finally agreed to supply Ukraine with 14 Leopard 2 tanks after stalling on the decision for months. A US announcement is expected later today.

The expert said that Ukraine has a chance to win the war in 2023, but ‘if you can’t take advantage of it because Western support is coming too little, too late”, then “the opportunity may not present itself again”.

JUSTIN BRONK, a research fellow at the Royal United Services Institute in London, discussed the latest situation in an article for MailOnline today as Ukraine prepares for a crucial spring and summer offensive.

After almost two months of brutal but geographically more limited battles in the Ukraine, both sides appear to be gathering strength for new offensives.

Russian forces have lost many thousands killed and wounded in repeated attacks on the cities of Soledar and Bakhmut.

They have used heavy artillery and infantry assaults to force slow and extremely costly advances through lines of muddy, shell-pierced trenches that in many ways resemble World War I.

But Ukraine has also suffered heavy losses defending these areas of the Donbas, yet one of the key elements of both sides’ strategies has been to try to limit the number of forces they commit.

Ukraine ended 2022 with two resoundingly successful counteroffensives, in the north and the south. In the north, Kharkiv Oblast was liberated along with the cities of Kupiansk, Izyum and Lyman.

Meanwhile, in the south, most of the Kherson region was liberated, including its capital, when the Russian army was crushed and eventually forced to withdraw from the western bank of the Dnipro River.

Similarly, Russian casualties have been extremely heavy, with recent estimates by Norwegian intelligence suggesting that around 180,000 Russian soldiers have been killed, seriously wounded or captured since the start of the invasion. 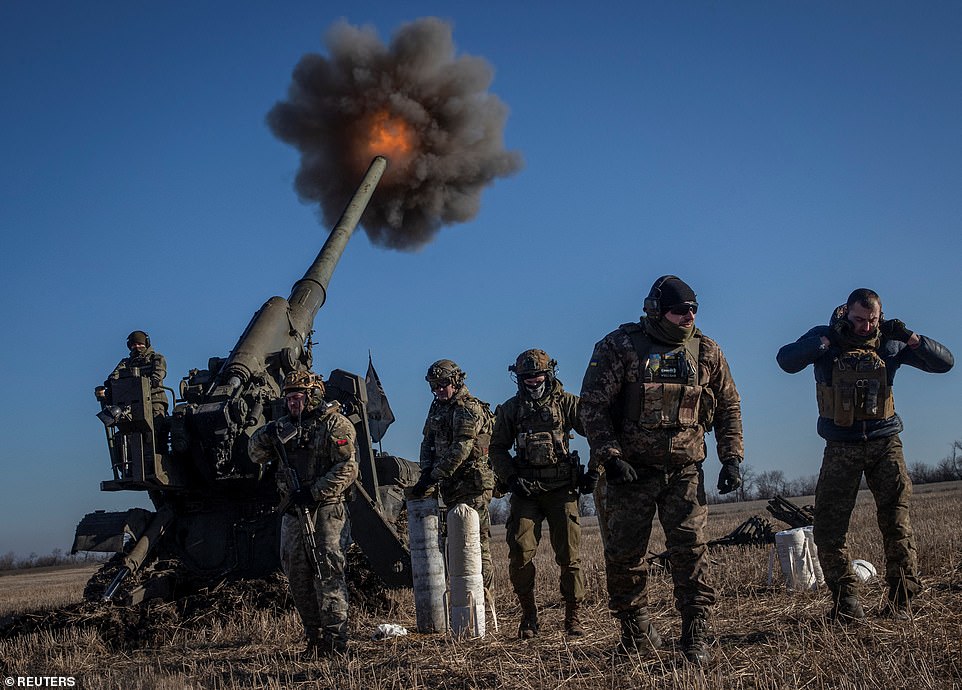 Bronk thinks Ukraine could beat Russia this year, but Western support would be vital. Pictured: A Ukrainian artillery team fires yesterday at Russian positions near the town of Bakhmut in the Donetsk region. 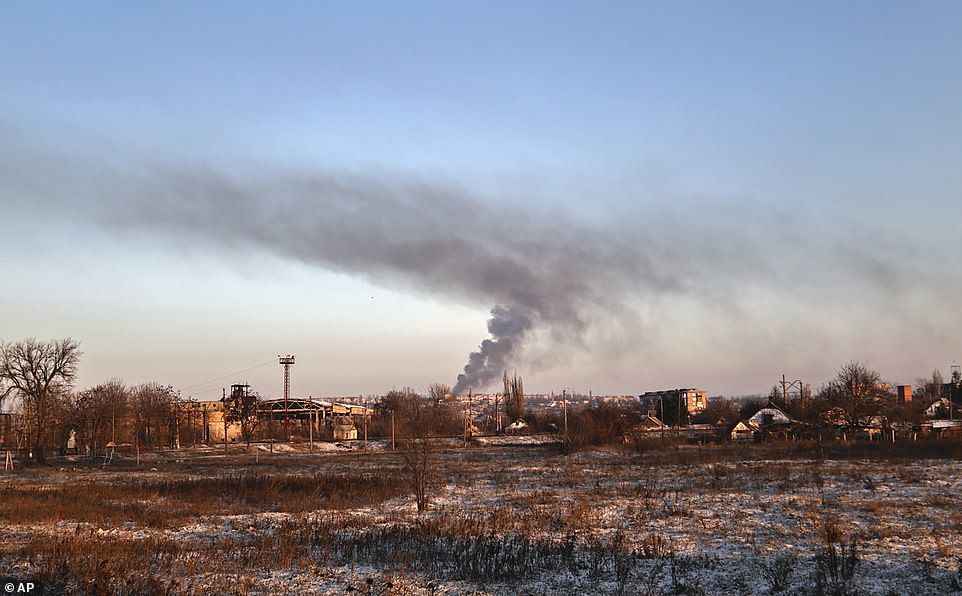 Smoke rises after shelling in the town of Soledar, the site of heavy battles with Russian forces in the Donetsk region, Ukraine

Therefore, both sides have sought to disrupt the other’s attempts to rebuild their forces with new recruits and new equipment this winter, in an attempt to regain the initiative first in the spring.

Russia has mobilized about 300,000 new recruits since the end of September, with about half immediately sent to Ukraine to stabilize the front lines that had been so successfully withdrawn.

Those troops that were quickly dispatched had very few training opportunities and often very poor equipment, so they suffered terrible casualties in winter battles and have low morale.

However, the other 150,000 or so have been training since September and have received tanks, artillery and armored vehicles to form new units.

These are likely to be used to carry out a new Russian offensive push in February, with a more ambitious goal than the heavy fighting around Bakhmut and Soledar in recent months.

They will not have had time to become good soldiers or professional units, but they will be much more capable than the new recruits thrown into the lines before Christmas.

In addition, Russia is preparing to start another wave of mobilization, supposedly with the goal of generating up to 500,000 additional recruits to generate more units.

Russia’s military industry is also belatedly going on a war footing in response to the current severe shortage of munitions of all kinds on the front lines.

Since Russian President Vladimir Putin did not plan for a protracted war, his country’s industry did not mobilize to meet the sudden demand until it became clear that things had gone very badly in Ukraine. 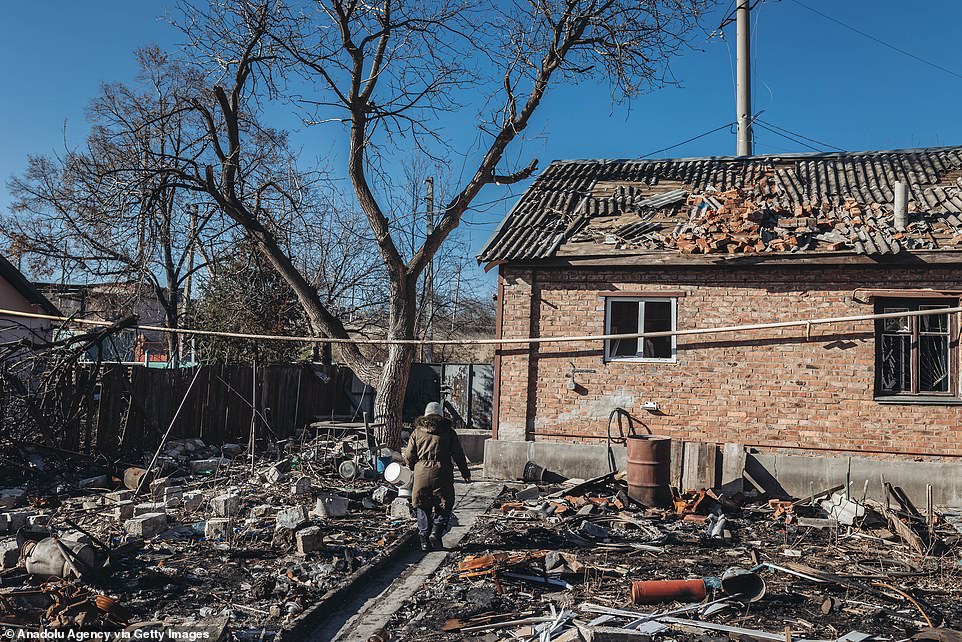 A woman walks past a damaged house in Bakhmut, a city that has been the focus of fierce fighting. 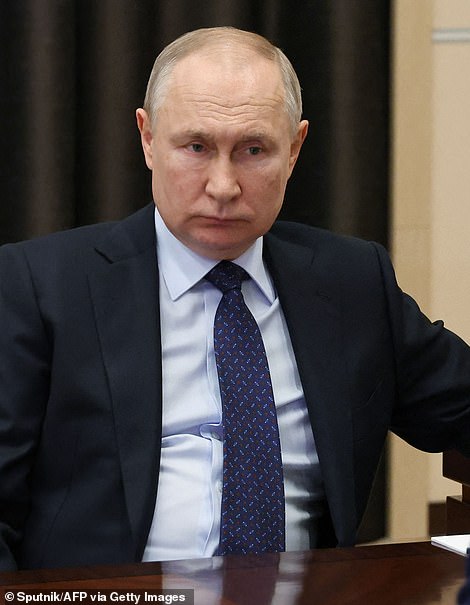 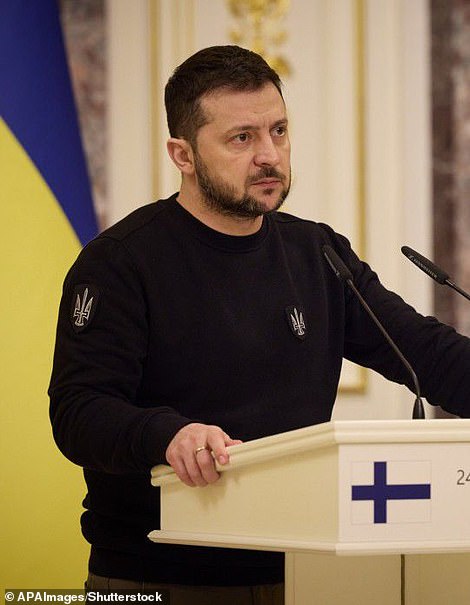 Justin Bronk said being able to operate his new armored vehicles in early spring could allow President Zelensky’s forces (right) to “make decisive breakthroughs.” Putin is pictured on the left.

The result has been a growing lack of modern equipment and even artillery ammunition for Russian units at the front and for those being trained to form new units.

Factories are now concentrating on building large quantities of fewer types of munitions, vehicles, and weapons, which over time is likely to result in significantly improved quantities reaching Russian troops.

Ukraine mobilized around 700,000 people when it was invaded in February last year, and also spent the winter training and equipping as many as it could to reinforce depleted units and to raise new ones.

However, the equipment is a key bottleneck, as much of Ukraine’s defense industry and economy have been badly damaged by Russian missile attacks.

But what they need now is heavy equipment to take back as much of their stolen territory as possible while Russia is in a weak position.

The Kremlin’s anticipated offensive in February will fail to defeat the Ukraine and will likely suffer more terrible casualties when relatively poorly trained units attempt to assault Ukrainian lines that have fortified over the winter. 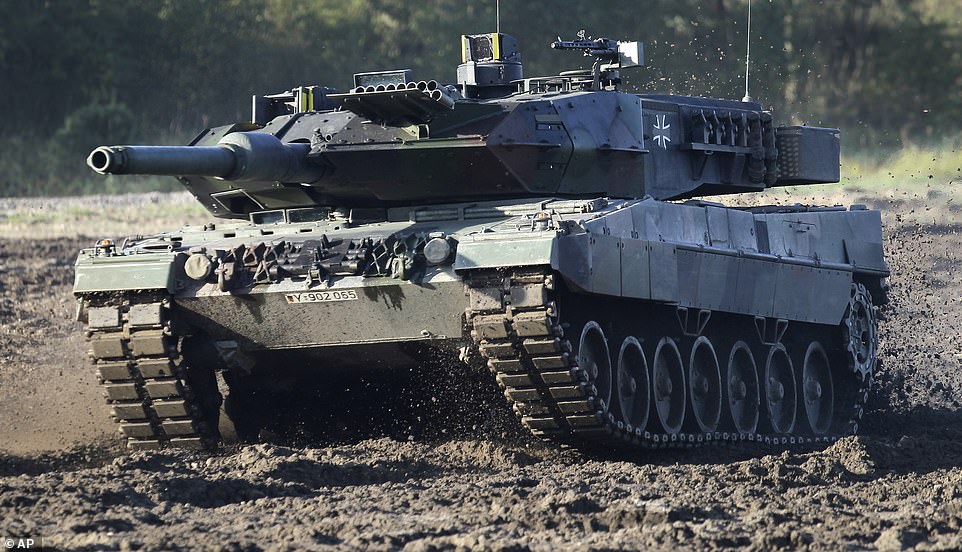 A German Leopard 2 tank at a German Army demonstration event. A total of 14 will now be shipped to Ukraine. 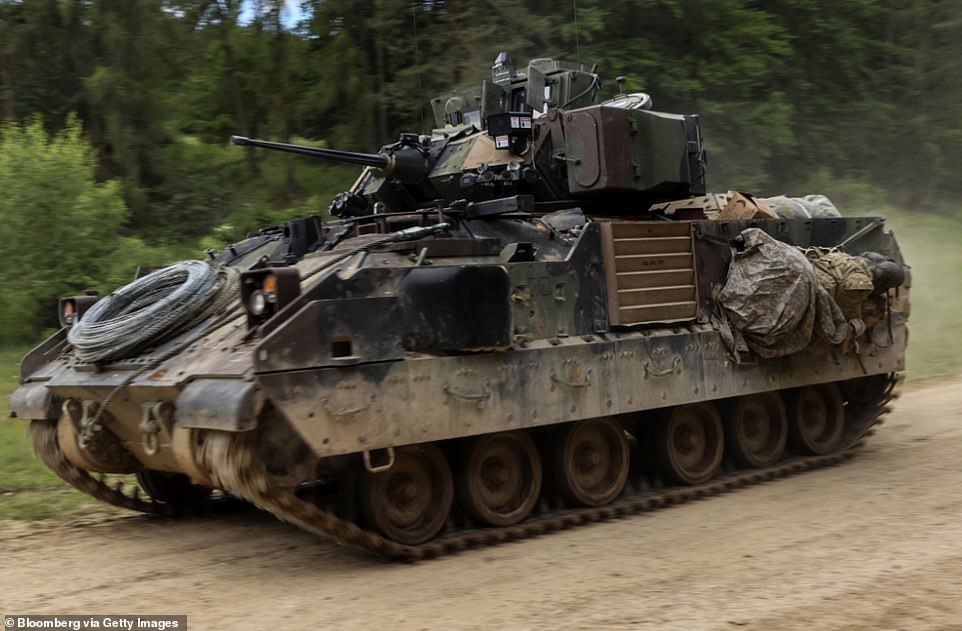 The United States is expected to supply M2 Bradley infantry fighting vehicles. Bronk says having modern tanks will be vital for Ukraine

The decisive question is how successful the Ukrainian counteroffensive will be in the spring and summer.

What the Ukrainian troops need are hundreds of armored vehicles, with firepower that can protect them from artillery as they traverse muddy battlefields to assault Russian positions, and main battle tanks and mobile artillery systems to provide fire support and anti tank attack.

If enough units can be trained, supplied and supported to operate vehicles like the US M2 Bradley infantry fighting vehicle and the German Leopard 2 main battle tank by early spring, then they will be able to make decisive gains without suffering crippling infantry losses in the process. .

This should be the West’s goal: to help Ukrainian forces retake as much of their territory as possible before Russia’s next wave of conscripts and renewed military-industrial production begin to shift the balance of power in the fall.

If Ukraine does not receive the heavy equipment and support fuel, maintenance, assault bridges and engineering vehicles to use them effectively at scale by the spring, Russia may still be able to force a stalemate that lasts until well into 2024.

Ukraine has a chance to win the war in 2023, but if it can’t take it because Western support comes too late, it may not come around again.

For the West as well, a stalemate that lasts into next year and potentially beyond will be far more costly and destabilizing in the long run than providing Ukraine with what it needs to win now. 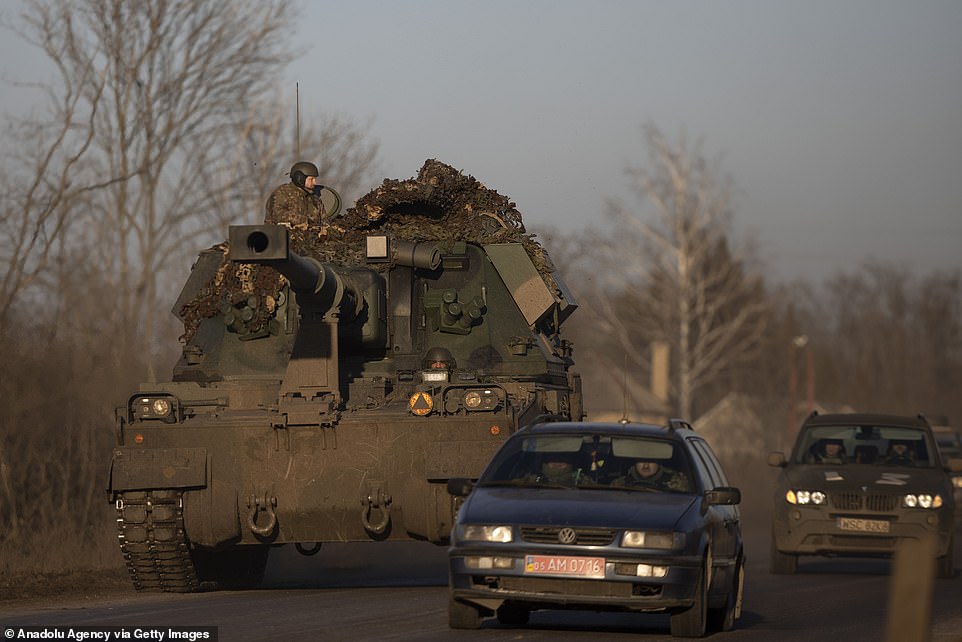 Regé-Jean Page is the most handsome man in the world